Click Here to View History of WDMS All Award Recipients

Congratulations to Our Members

Dr. Finberg was a friend, colleague, mentor, Chair Emeritus, and distinguished Professor of Medicine. He was an accomplished clinician, infectious diseases researcher, mentor and valued leader of our Department of Medicine for 21 years. Dr. Finberg was an internationally renowned physician scientist, with over 300 publications and innumerable research awards and honors from the National Institutes of Health, Department of Defense, the Defense Advanced Research Projects Agency, and other agencies. We all witnessed the significance of Dr. Finberg’s research as he helped develop, test, and implement new therapies for our patients affected by SARS-CoV-2. He helped shape our response to the pandemic and was the principal investigator on multiple clinical studies related to therapeutics and vaccines for SARS-COV-2.

Appointed in 1999 as Chair of the Department of Medicine, Dr. Finberg skillfully directed the educational, clinical and research activities in the largest academic department while continuing to care compassionately for some of the sickest patients in the hospital. He dramatically expanded the faculty ranks over his two decades as Chair and created new divisions. He was known for mentoring his Chiefs and being a generous collaborator with other Chairs and system leaders across the UMass Medical School and UMass Memorial Health organizations. He established close ties with other academic institutions and clinical affiliates. He was a strong advocate for faculty and staff development, overseeing three residency programs and fellowship training programs in more than 16 specialty and subspecialty areas.

Dr. Finberg’s impact on his colleagues and mentees, was profound and cannot be understated. He met with every internal medicine residency applicant for twenty years and he deeply cared about each of his over 400 faculty and staff. He was invested in mentorship and was proud of his contributions to the career development of his many students, residents and faculty, many of whom went on to illustrious careers and whose achievements have brought international recognition to our medical school and health system.

Dr. Finberg was known for his infectious laugh, dry wit and great sense of humor and of course his iconic hat. He will be greatly missed by his colleagues, peers, and family.

2022 WDMS/MMS Community Clinician of the Year

Dr. O’Connor grew up in Brooklyn, N.Y. and graduated cum laude from Boston University with a degree in Biology and Environmental Sciences. She then completed her medical degree at the Royal College of Surgeons, Dublin, Ireland and subsequent OB/GYN residency at Stamford Hospital, Stamford, Connecticut. She went on to work as a staff physician at the Fallon Clinic, Worcester, Massachusetts and then for UMassMemorial Medical group. Currently she is a partner at Women’s Health of Central Massachusetts and performs surgeries and deliveries at UMassMemorial. For many years she has attended to patients with gynecologic problems from the St. Anne’s and St. Peter’s clinics. She has also worked at El Buen Samaritano Hospital in La Romana, Dominican Republic on mission trips to perform gynecologic surgeries for underserved Dominican and Haitian women. In addition, she is part of the Shrewsbury chapter of the Days for Girls International organization who sew reusable menstrual hygiene kits that allow girls to remain in school full time. These kits are then distributed worldwide. As part of the Dominican mission, these kits are brought and distributed to the Bateyes and orphanages in the La Romana area.

Dr. Robert Sorrenti graduated from Harvard Medical School in 1973. He completed his residency in Pediatrics and was Chief Medical Resident at Children’s Memorial Hospital in Chicago. He returned to Massachusetts to be the Chief of Pediatrics at the Worcester City Hospital. For about twelve years he was in private pediatric practice while participating in student and resident education. Following that he embarked on a career in healthcare management. For about 15 years prior to retirement in 2020, he served as the chief operating officer of a health plan. He currently remains active in his community and, in addition to his participation in the activities of the Medical Society, serves on the Worcester Public Library Board and the Music Worcester Board.

Dr. Kavita Babu, Professor of Emergency Medicine, serves as Chief, Division of Medical Toxicology for the Department of Emergency Medicine at the University of Massachusetts Chan Medical School, and the Chief Opioid Officer for the UMass Memorial Health System. She earned her M.D. from Brown Medical School where she also completed her residency, and then came back to complete her Toxicology fellowship, at UMass.

Dr. Kavita Babu has made incredible contributions to the community, her efforts are extensive, action oriented, and hugely impactful. Over the last year and a half through the COVID-19 pandemic, where she worked with colleagues on a project to deploy and manage COVID testing sites across Worcester. The sites also provided education in multiple languages and masks. These sites were a safe place for people afraid or unable to go to institutional sites.

Kavita is a superb female physician leader who in addition to her regular duties as an Emergency Medicine/Toxicologist, is passionate about the prevention of drug overdoses and the provision of care to patients with opioid use disorder in Worcester and our surrounding communities. She works to advance health care and social service delivery to the homeless and those with substance use disorder. Other examples of this work include initiatives at the University campus focused on limiting unused prescription opioids in the community for primary prevention of opioid exposure and increasing access to lifesaving treatment. Dr. Babu also established the Overdose Prevention Fund, a philanthropic fund which has been used to support collection of unused medication and for community education. She addressed the root cause of limited numbers of physicians trained to treat SUD and subsequently obtained a grant, in a time where grants are scarce, to offer numerous trainings for the buprenorphine certification across central Massachusetts.

Dr. Babu is well known nationally and internationally for her work combatting the opioid epidemic. On the local front, Kavita secured a grant from the DPH and the Kraft Foundation, which established the “Road to Care” Mobile Addiction Service that provides free primary care and addiction services for homeless patients and those needing management for addiction. Kavita has taken her team to the streets providing care in over 350 visits, to shelters, food pantries, and in encampments throughout the City of Worcester. This accomplishment alone required the engagement of UMass IT, the pharmacy division, the Department of Public Health and involved bringing together 3 community service providers -AIDS Project Worcester, the Elliott group and Family Health Centers Homeless Outreach and Advocacy Project. Kavita is truly the “master of collaboration”.

Finally, Dr. Babu serves as a mentor and a positive role model with impressive medical knowledge, open minded and unbiased medical care, and an unbelievable level of both scholarly and ground-level action-oriented projects. She is a natural leader with a deep dedication to our community and has contributed greatly to the safety and health of Central Massachusetts. She is truly a gift for the Worcester community.

Dr. Thomas Halpin, a WDMS Member since 1970, graduated from Harvard Medical School in 1963. He then completed an internship in the Department of Surgery at Columbia-Presbyterian Medical Center in 1964. Then in 1965, he honorably completed a military commitment in the United States Army Medical Corps as a Major and Ob/Gyn in the Martin Army Hospital, in Fort Benning Georgia, followed by the 3rd Field Hospital in Saigon, Vietnam in 1966). Upon returning from Vietnam, he completed his residency in Obstetrics & Gynecology at Sloane Hospital for Women, Columbia-Presbyterian Medical Center, before moving to the Worcester area, in 1970.

Since his arrival, Dr. Halpin has been a pillar of the Worcester district Ob/Gyn community. He has provided compassionate and comprehensive care for generations of women, delivered thousands of babies and has contributed to the training of literally hundreds of medical students and Ob/Gyn residents, who now practice across the country. A former trainee, now colleague recollects that for the past 25 years, Dr. Halpin has dedicated almost every Monday at 4pm to Socratic case-based gynecology discussions with residents and students that have respectfully and affectionately come to be known as ‘Halpin rounds.’ His dedication to teaching and mentoring is evident in him being a recipient of numerous resident selected teacher of the year awards (1983, 1998, 2001, 2005, 2014) as well as the National American College of Obstetrician and Gynecologists’ and Council on Residency Education’s Ob/Gyn Excellence in Teaching Award (2002). Dr. Halpin served as an Assistant Professor at the University of Massachusetts Chan Medical School from 1973 to 1980. By 1988 he had been promoted to Full Professor and served in that capacity for the next 32 years. Additionally, he has served the medical school as a member of the admissions committee from 2004 to the present.

Dr. Halpin has been a foundational and innovative leader in the Worcester district medical community, having served on the Board of Trustees for the Central Massachusetts Health Care, Inc. (HMO-IPA) and the Chair of their finance Committee (1981-1988). And in the UMass Memorial Health Care System and University of Massachusetts Chan Medical School community Dr. Halpin led or chaired numerous committees. He was President elect (1979-1980) and President (1980 1982) of the Medical Staff of the Memorial Hospital, Chairman of the committee to study the feasibility of a Memorial Hospital Preferred Provider Organization (1982) and Trustee of the Memorial Hospital Foundation (1984-1988), former Acting Chair (1988-1989) of the Division of Reproductive Medicine, now the UMMH/UMMS Department of Obstetrics & Gynecology.

With the COVID-19 pandemic, Dr. Halpin made the difficult decision to retire from clinical practice after 50 years as a highly respected and accomplished Ob/Gyn attending and health care leader. However, he remains deeply dedicated to education and continues in his role as a Medical School Learning Community Mentor. As a full Professor at the University of Massachusetts Chan Medical School for over thirty years, his contributions to health care delivery and leadership, education, and academic medicine, Dr. Halpin was recently awarded Professor Emeritus status.

The description of Dr. Halpin would not be complete without recognizing the love and gratitude for his family; his wife of 57 years, Pat, his four children and nine grandchildren, for all of their support. 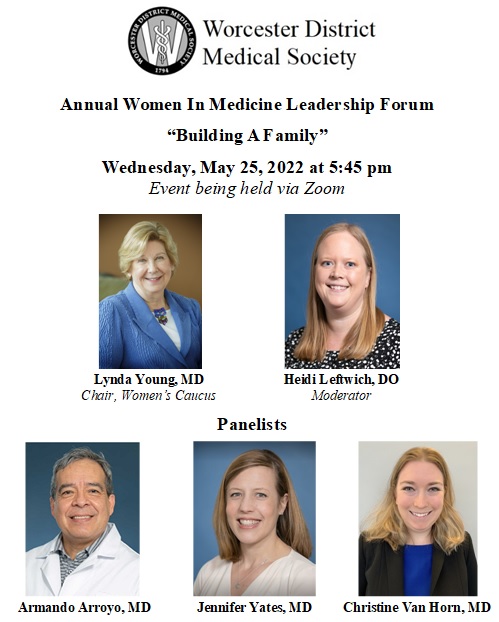 Click here to learn more about the Moderator and Panelists